I haven’t found it in any public post, but commissioners have sent out an email that a car was stolen recently in the township. There’s been a wave of break-ins throughout the township, starting in the south and moving north. Cars were unlocked (the keys were left in […]

The report posted today by the county is a reminder that many are intent on attacking our government. On Sept. 10th the county government was subject to a phishing attack. Between Sept. 10th and Nov. 21st the attacker secured additional information and eventually launched a full-scale ransomware attack […]

How to get rid of everything

With the holidays, we usually end up with more material goods. But logically, that means something has to make way for the new. So how do you get rid of the old? One caveat, some of these programs have been curtailed by the pandemic. But they’ll all likely […]

The township held its last meeting of the year and approved the 2021 budget. The township is holding a blood drive at the township building on Dec. 30th from 2-7 pm. Donors are still very much in need. Sign up at https://redcrossblood.org and use the sponsor code Nether […]

The school board held its last meeting of 2020. An email went out on Monday moving Strath Haven Middle and High Schools online until the break. The schools reached the Covid thresholds set by the state for schools of their size (4 for the middle school, 6 for […]

Taxes after the re-assessment

Last year, the county performed a court-ordered re-assessment of all property values. This year, all taxing entities have to reset the millage rates so that the revenue they bring in remains unchanged (but they can still increase taxes after that). The county and township have posted their preliminary […] 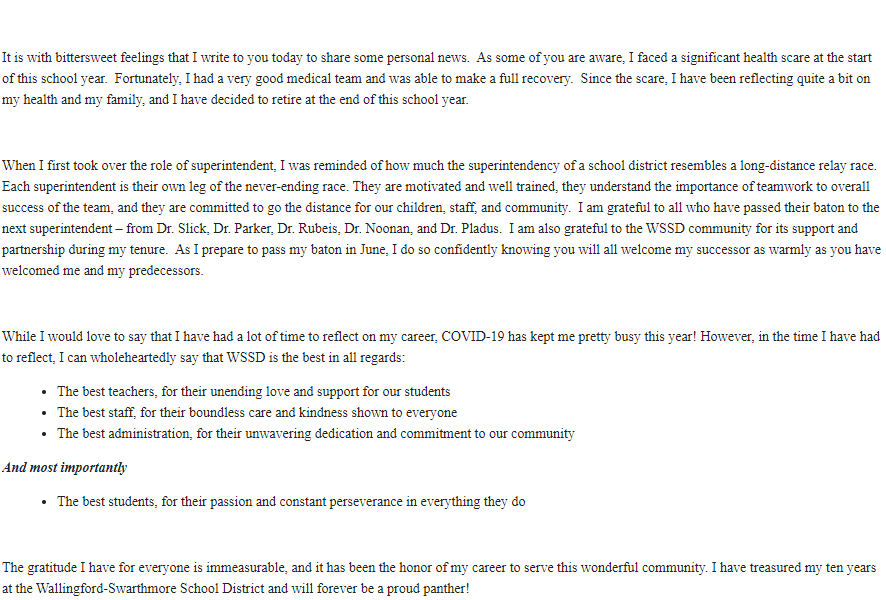 WSSD Superintendent to Retire in June

The school district sent out an email this morning announcing Lisa Palmer’s retirement at the end of the school year. The letter from Dr. Palmer is below.

One of the platforms the Democratic county council members ran on last year was transparency. This year’s proposed budget document is a testament to that commitment. Its available here, and there’s a presentation on it later this morning. Not only does it have lots of useful information, but […]

The Wallingford-Swarthmore School Board held their reorganization meeting online again, the video is on their Youtube channel here. Officers are a continuation from 2020: David Grande as president, Kelly Wachtman as vice-president and Michele Downie as assistant board secretary. Board committee appointments are listed here. Out of district […]